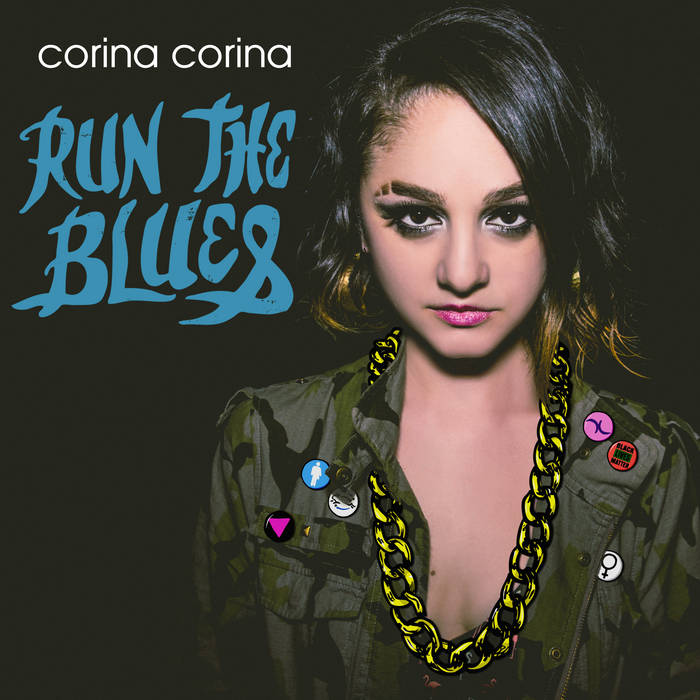 About Run the Blues: Not many female artists have rocked the male-dominated DIY hip hop touring trenches the way Oakland/Brooklyn-based Corina Corina has. Sure, sleeping on floors and couches, living on pizza, coffee and cheap beer, and driving for long stretches everyday to perform for little to no money would be hard for anyone, but being a woman has its added stresses.

Corina has confronted misogyny in all forms: not being respected as a tour manager, constantly being asked if she's the DJ’s girlfriend, or full blown sexual harassment. Corina never wanted special treatment, she just wanted to be an equal in the battlefield that is the indie show circuit.

Turning that frustration into determination, Corina dealt with being a woman leading a nomadic lifestyle in the best way she knew how: she wrote songs about it. Her latest release, Run the Blues, explores a not-often-discussed side of femininity and serves as a tribute mixtape to two of her favorite artists - Killer Mike and El-P otherwise know as Run the Jewels - featuring all original lyrics and melodies written by Corina Corina exclusively over beats from 2013's Run the Jewels (Fool's Gold Records) and 2014's Run The Jewels 2, (Mass Appeal Records.) On it, Corina reflects on the past five years touring nonstop and the unique effect it’s had on her.

She talks candidly about her fleeting love affairs, fatigue from being constantly sexualized, disappointment from lackluster show attendance, and loss of a longtime-love to another woman. However, never one to take herself too seriously, she also shows that female MCs can be just as bragadocious as their male counterparts and that she doesn't have to ask for permission from anyone to do, say, or be exactly who she is.

Keeping it in the family, Corina collaborated on the project with her younger sibling, Mari C., who is the head of sound at the legendary 924 Gilman in Berkeley, CA, and recently received a degree in audio engineering from the SAE Institute. Creating this project together was nothing less than meant to be.

Serving as a side project in between her second a long-awaited third full length album, Run the Blues is one part tribute, one part family affair and one part intimate memoir of a modern-day musical road warrior.

All songs Recorded and Mixed by Mari C. and Mastered by Willie Green for Paul Womack Media (BMI)

1. Get it - vocals written and performed by Corina Corina, additional vocals by Sel-P and Mari C.
Instrumental: “Get it” from Run the Jewels, produced by El-P

2. My Baaad - vocals written and performed by Corina Corina
Instrumental: “Love Again” from Run the Jewels 2 produced by El-P

6. No Sugar. No Cream. - vocals written and performed by Corina Corina
Instrumental: Jeopardy from Run the Jewels 2 El-P Little Shalimar

Track Name: Get it
Get It


Many many men act thirsty
As if they’ve never been around a lady
Plus I melt faces off with my RnB
So why hasn’t this one stepped to me?


Avery night is brand new
New city, always a new boo
I do whatever I want to (true)
I’ll admit I’ve had a few


You know I’ll get it!
Track Name: My Baaad
To every guy that I
Ever kissed and didn’t mean it
And when I went MIA
I just hope you took the hint

You know sometimes a girl like me
Just needs some attention

You know sometimes a girl like me
Just needs some attention

Two cuts in my eyebrows stay wildin out
Eyes all black, bright pink on the pout
Like the isleys make em twist, make em shout
Cause all they wanna do is just put me in their mouth


Cause I'm not a floozy thirsty for the D
None of these lames coming home with me
But if I feel like a little roll in the sheets
Just call me a lyft, give a kiss on the cheek, peace!


Run the, Run the Blues

Crawled up from the bottom, fucking hater I’m here
I’mma stay in the field, like them trackers John Deere
Mow suckers over, until I’m worldly discovered
Dressed in all black, I’m gonna show my true color

Spit sick from da lips, honeybun, that’s valid
I’m the best forever, ask DJ Khaled
Middle fingers up, if you fucking with me
Put ya drank in the air, for the kid, DT

Not to mention that I’m so fucking gorgeous
“#STAYINYALANE” or proceed with caution
It’s Corina Corina, DeShawn Timothy
Visibly the sickest queens up in these streets
Track Name: Mine ft. Dj HALO
Don’t look at me with those beautiful big brown eyes
I know you can see right through to my insides
When you get close, I can’t even hide
That you bring my cold dead heart right back to life

You’re mine, all mine
She thinks that you are hers but we all know that’s a lie
You’re mine, always be mine
Quit trying to be a tough guy, why even deny?

You’re mine, still mine
She thinks that you are hers but we all know that’s a lie
You’re mine, always be mine
Quit trying to be a tough guy, why even deny?
Track Name: Disappointment
Another night another let down
Wanna cry but I'm too proud
Can’t bring myself to call you out
So I hold it in for now

Yo, I've done so many shows
Wondering if you would appear
Hoping I have enough drink tickets
To wash it all down with beer

No power, yes I know
Over how you feel for me
And even of there was hope
You'd probably never let me know, so

I strip myself bare behind the pop screen
Tears in my eyes, I sweat, I bleed

For every small victory
Is a little bittersweet
Cause another one has shown me
That they’re still not down for me
Track Name: No Sugar. No Cream.
I may be young but I’m not a kid
And I’m not dumb, I know what this is
Reflective, self aware
Asking for trouble but I don’t care


You’re the only one that I can’t read
And another goal i have yet tot achieve
It’s gonna take work taming your beast
But I’ll get you to fall in love with me, so


Keep on keeping me guessing
You know that I love asking questions
Nobody can challenge me, but
You’re so damn refreshing, so


Know what I mean?


Your eyes follow me around the room
Jealous of whoever I’m talking to
You’re trying trying to maintain your cool
But I’m cute, baby I don’t blame you


I so appreciate what you’re doing
You have my attention now please don’t lose it
Urgency is so overrated
They’re all thirsty but you’re well hydrated, so


Know what I mean?